Locksmith Near Me of Hampton, Virginia News and Information

Local Service ProvidersLocksmith Near Me of Hampton, VirginiaNews and ArticlesCommercial LocksmithHow to Rekey A Padlock 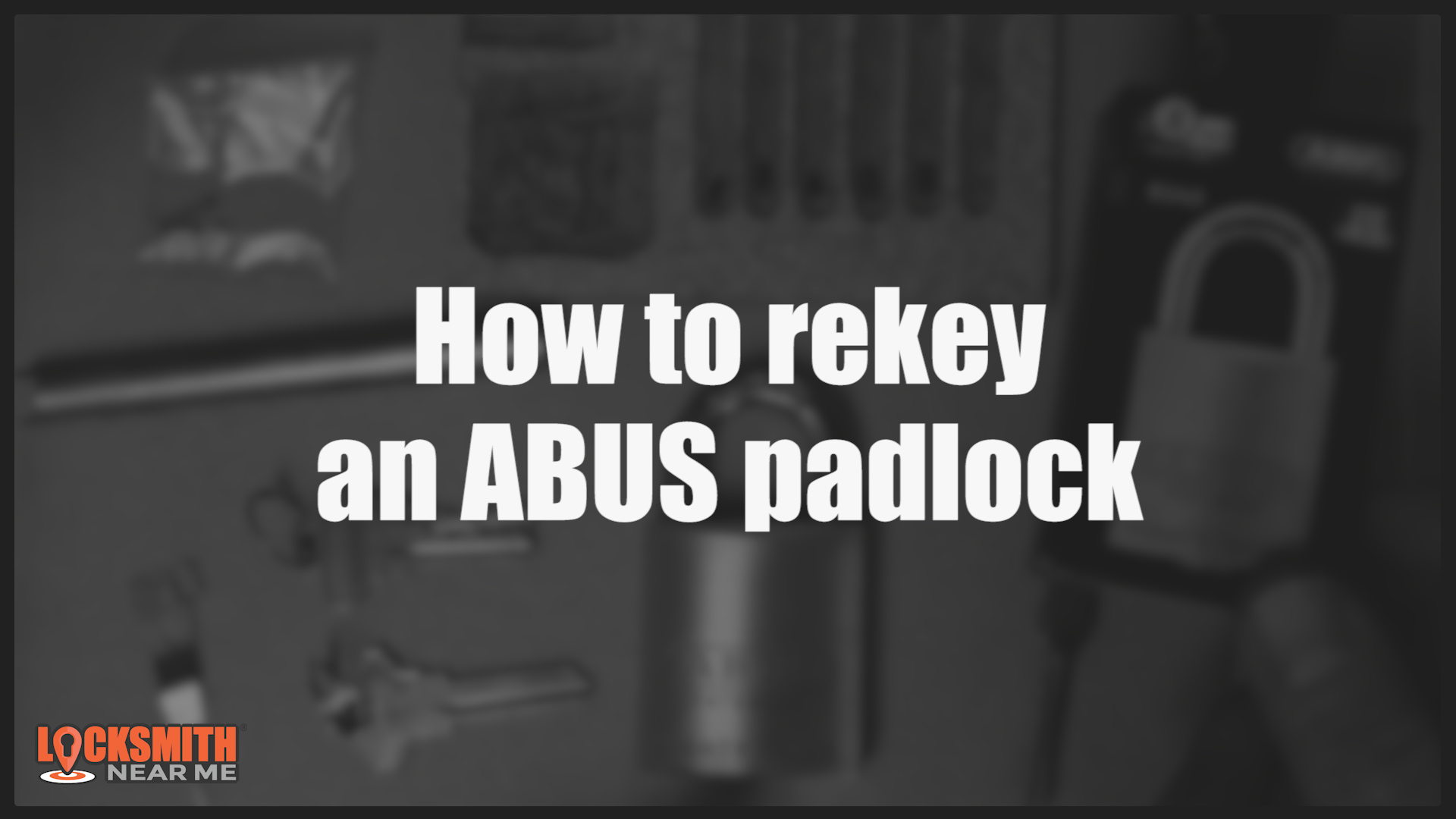 How to Rekey A Padlock

How To Rekey An ABUS Padlock Video Transcript:

So, what we're going to do is rekey an ABUS padlock series 83. Comes in a box like this. This has a couple of features that I'll describe as we go. When you purchase the lock it comes with a one-cut so they're intended to be rekeyed I've already set out the pins that we're going to rekey to this set of precuts.

So, we just simply... first of all open the padlock. This doesn't have the key retaining feature with that cut, so now we're just going to remove the Phillips screw that holds the cylinder core in place with a screwdriver down the shackle hole. That comes out once that's unscrewed the cylinder comes out. Now there's another piece inside and as the screw comes out you'll notice if you can see inside there there's another piece inside that actuator called a Z-bar we're gonna see if we can knock out. Pull it out with tweezers and I'll show you what that looks like. That's this little guy right there and that is the key retaining feature.

If we don't want the key, once we pinned this up with longer pins than the stock cut, this will keep the key in the lock when it's unlocked. So, we'll set that aside right here for now. Now that we have the cylinder out we will use this tool to remove this clip.

I also noticed that this has a detent. What that does is it only enables the cylinder to turn that far. Okay so we need to press that in in order to remove the cylinder. You also saw this come out when I removed that clip, this is the actuator, there's two different lengths on the backside. The shorter side here rides against this detent pin, so when you replace that make sure that this in indented part is on the same side as the detention pin. So, we'll set that aside.

Then we'll put the key in and we'll use the follower and simultaneously we'll press down the detent and remove the core. The detent pin does not come back out it's got a keeper in there. So, these are all of our one cuts from the factory so we're just gonna dump those out and now we'll pin this up for this key and I've already laid the pins out there so we'll drop these in.

Now you can see the cylinder will accommodate six pins, we're only using a five pin key so we won't put anything there, however, after the fact if you want to add a sixth pin this comes with this

kit which adds another top spring, another driver spring, and a plate to cover the top spring so you don't have to remove the whole cylinder if you want to add a sixth pin to key that.

So, now that we've got this pinned up and lined up, well, flush, confirmed all the pins are there we'll put this back in. And again, we have to be mindful that we have a detent there. So, there's probably a better tool than a fingernail but that works. So, now that's in place. Now if we were going to add a sixth pin to this after the fact, this hole right here is where you would put your top, you'd drop your key pin in there then you drive our pin and you can see that's a spool security pin and the spring. And then this little plate slides in right there to keep your spring down so you can add a sixth one without having to remove the cylinder.

Also, by the way, there are spool and serrated driver pins in this lock from the factory so there's already an added layer of security in these against picking. So now that we confirm that this works, our detent is there, our cylinder is not going to come out, we can pull the key out and then we're going to our actuator making sure that the cut out part is on top of the detent. Then we'll add our clip back in. And this little notch here goes into the bottom of the key way and it holds our actuator in place so it has to be centered when you put that back on.

There we go. Now we're gonna put the key in there just in case we have to turn that a bit in order to get it to seat back in there.

Okay hear that click that's all the way seated you can see the cylinder face is flush with the lock body and then we'll drop our screw down in there. And now you can already see the key retaining feature is in place because I cannot turn this back horizontal to where the pins come out of the Bible into the cylinder and be able to remove that key. So that confirms that the key retaining feature is in place. The advantage of this feature is that if someone has a lock that they don't want floating around in the unlocked position or they've got multiple padlocks that are keyed differently they're not fumbling around for the right key when they want to go back and lock it they can't lock this into place unless they have the key with them so the key retaining feature adds another level of valuable features. If you don't want that done so this won't come out unless it's locked that's the key retaining feature. To disable that all we would have had to have done is leave that Z clip off the actuator still opens the lock and then the key is removable.